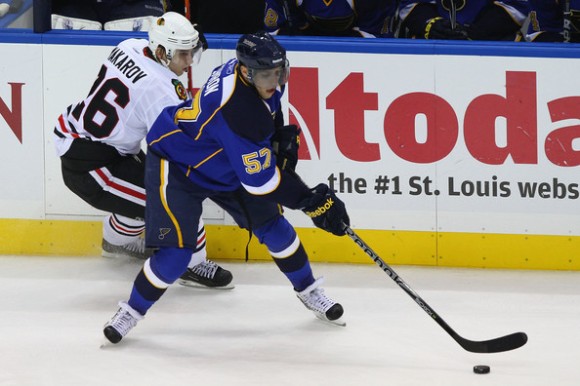 Saturday marked the return of St. Louis Blues forward David Perron, who missed 394 days with a concussion from a hit by Joe Thorton (as seen here). While we did lose his first game back, it wasn’t without effort – Perron scored the first goal. This 23-year-old is the real deal folks.

1. The numbers: OK, I realize you can’t discuss an athlete without stats. In his first three seasons with the Blues, he tallied up 48 goals and 76 assists, with a career high 50 points in his sophomore season. No slump for this kid. Prior to his concussion, he had 5 goals and 2 assists in 10 games. He’s two for two this season with a goal and an assist.

2. His hands: Talk about dangles. Perron has quick, skilled paws that allow him to rack in those numbers mentioned above. With Perron, you’re not afraid he’s going to screw it up like many other forwards his age. Coaches feel confident with the puck on his stick, and opponents feel intimidated.

3. His attitude: Have you heard ANYTHING negative about this kid? He has that just-started mentality – arrive early, play hard and have fun. Every post-concussion interview tugged at your heart strings because all he would say is how hard it is to be away from the rink. “That’s probably the toughest thing. You don’t get to come to the rink. It might sound weird but that’s probably the toughest thing…it’s not being able to skate everyday and be with the teammates” (via YouTube). So often pro athletes forget that their being paid to play a kids game. Perron is the kind of guy that forgets he’s getting paid.

4. He Tweets: Now, @DP_57 may not have the following of fellow player Paul Bissonette (@BizNasty2point0), but he knows how to connect with his fans. Whether it’s correcting the NHL for misspelling, giving other players crap about their following (@JackJohnson3 is giving out free Ferrari rides for follows, by the way) or just being generally greteful for what he has, Perron’s personality shines in English and French.

5. His White Skates. Seriously, who does that?