I don’t know about you guys, but I hate going to the gym. I have a gym at my office, so I can’t just come in sweats and go home disgusting. I have to be prepared to work, especially since lunch time is the least busiest time to go (and gives me no excuse not to). Packing your bag is essential! Below are my top 10 must haves, along with a few extras.

And of course, don’t forget your work out clothes or headphones – you’ve gotta have something to jam to! Personally, I’m a big fan of Songza‘s playlists – Drop-A-Beat Workout is my favorite!

What is in your gym bag?

Thanks to Glamour Magazine for this entertaining post about the new generation of boy bands. For awhile, I was afraid the current generation with going to be stuck with Justin Bieber.

When I grew up, you didn’t just have one “musician” to drool over, you had four or five per group. Not including the fact that we had a choice between five main bands – Backstreet Boys, *NSYNC, 98 Degrees, LFO and O-Town. Let me refresh your memory.

The original boy band, Backstreet Boys, popped on the American scene in 1997. With dreamy members such as Nick Carter, Brian Littrell, Kevin Richardson, Howie Dorough and bad boy AJ McLean, this Orlando based dream group was melting the hearts of girls from 7 to 77. With heart-felt tunes like “As Long As You Love Me” and “I Want It That Way,” as well as crowd pleasing “Everybody,”(talk about an epic video.) they became every girls dream. 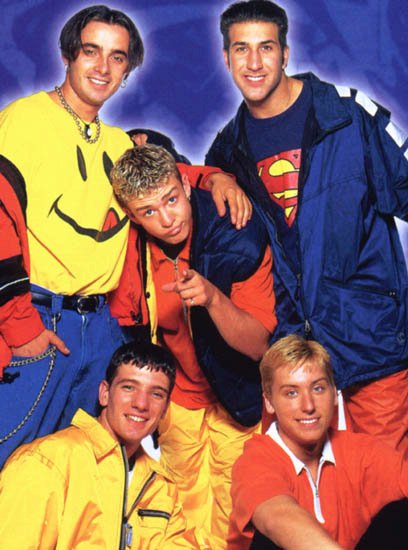 Then came the ever-loved *NSYNC. Led by heartthrobs Justin Timberlake, JC Chasez, Lance Bass, Joey Fatone and Chris Kirkpatrick, this copy-cat band burst onto the scene in early 1998 with “I Want You Back.” (Please watch that – I’m pretty sure JT was all of 15 years old.) They gained quick popularity with catchy tunes such as “Bye Bye Bye” and “It’s Gonna Be Me” (that video is SICK!) With record breaking CD numbers and famous relationships (JT & Britney, Lance & Men), *NSYNC quickly surpassed BSB for pop royalty.

Then came the subpar groups of 98 Degrees (Nick & Drew Lachey, Jeff Timmons and Justin Jeffre), LFO – Lyte Funky Ones (Devin Lima, Brad Fischetti and the now deceased Rich Cronin) and the sometimes forgotten O-Town (Ashley Angel, Erik-Michael Estrada, Dan Miller, Trevor Penick and Jacob Underwood). Now while 98 Degrees members gained popularity in later years (Nick Lackey was married to Jessica Simpson, Drew Lachey won the second season of Dancing with the Stars), the biggest impact they made was making “I Do” the wedding song to have. LFO stayed quiet on the pop scene due to some dirty lyrics (seriously, listen to “I Will Show You Mine” and tell me that’s appropriate for pre-teens.), their hit “Summer Girls” is still a frat favorite. O-Town, one of my quiet favorites (I wanted to be Mrs. Ashley Angel), was the creation of ABC’s Making the Band – a Friday night favorite of my friends. I still squeal every time I hear “All Or Nothing.”

Sure, every generation has their thrill of heartthrobs, but I’m partial to the idea of the 90s boy band. New Kids On the Block laid out the red carpet for their following, and I hope the dream dates of my era do the same for the future.